The Original Teachings of Internal Alchemy and Qigong

In this final installment of the Yellow Court Scripture lecture series, Stuart Alve Olson explains the three methods a practitioner can undertake in cultivating the Internal Alchemy practices of the Yellow Court teachings, pointing out differences with the External Illumination and Internal Illumination texts. This insightful lecture is of great help to anyone engaging in Internal Alchemy, no matter the method or school, as Stuart explains the more cryptic terms of Seed-Water, Spirit-Fire, and Thought-Earth—the three foundations of all Internal Alchemy teachings.

Stuart also explains how the Yellow Court Scripture can be cultivated not only as a “contemplation,” “recitation,” and/or “visualization” work on Internal Alchemy, but also on how “sexual/spiritual-transformational energy” could be applied as well as its connotations with the use of “magic mushrooms.”

Combined, the three-seminar lecture series on the Yellow Court Scripture is one of the most in-depth looks at Internal alchemy and Taoist cultivation practices available. Within this series, Stuart navigates the many Taoist mystical and cryptic terms in a very clear and understandable manner. He is not just a translator of Taoist works but is also a longtime practitioner, which make his presentation on the Yellow Court teachings a distinctly valuable resource for all Taoist cultivators. 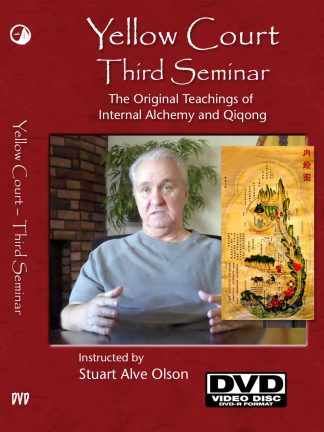