The Original Teachings of Internal Alchemy and Qiqong

Filmed over the weekend of September 2 & 3, 2017, this 5-DVD set of the Second Seminar on the Yellow Court teachings taught by Stuart Alve Olson contains lectures on each of the thirty-six chapters of the Yellow Court Internal Illumination, originally composed by Madame Wei Huacun (魏 華 存 夫 人, Wei Hua Cun Fu Ren, 252–334 CE), founder of the Highest Clarity Sect during the Jin dynasty.

These DVDs correspond to the verses of her text as presented in the (upcoming) second volume in the Yellow Court Series (available in late 2017). The information in these lectures, along with the material from the First Seminar DVD Series on the External Illumination, provide the necessary components for engaging in the beginning 90-day immersion practice of the Yellow Court. These teachings offer an abundance of insightful information, rendering a unique and effective approach to Taoist Internal Alchemy and Qigong practices. 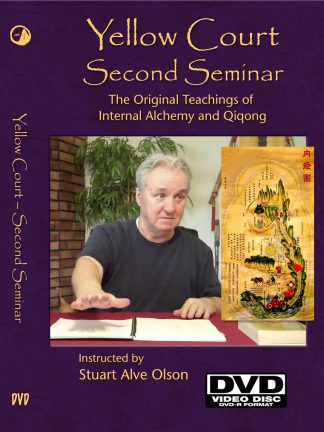