[printfriendly]This monk spade form is attributed to Lu Da (Martial Hero Lu or Eminent Lu), whose Buddhist name was Sagacious Lu. This brash, fearless, martial rogue monk was popularized in the Song dynasty Chinese novel Outlaws of the Marsh by Shi Nai’an. The form originates out of Shaolin Temple Kung Fu, as documented in the book The Eighteen Weapon Types of Shaolin, compiled by Wang Changqing.

The monk spade is one of the eighteen basic weapons a monk would learn. Traditionally, Taoist and Buddhist monks used it as both a weapon and implement during their pilgrimages and cloud wanderings. It was used for protection against fierce animals and bandits. As a tool it served to clear brush when making camp for the night, shoveling out a fire pit, and for digging holes in which to bury any dead animals encountered along their travels. This was especially true for Buddhist monks who would take vows to do this service.

Stuart Alve Olson’s purpose in publishing this book, as with his other translations of martial art works, such as The Eighteen Lohan Skills: Traditional Shaolin Temple Kung Fu Training Methods, is to present the text in English as close to the original Chinese as possible, and even using the original drawings. His goal is to help preserve these incredible teachings in their traditional form. 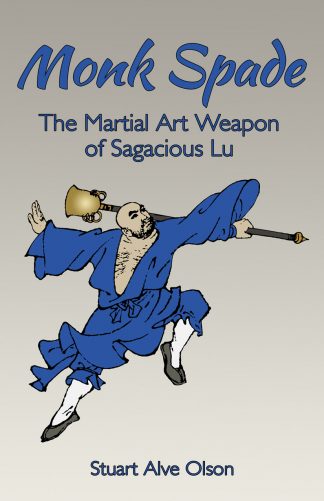