Embracing the One: Transformation Through Visualization

The Embracing the One (抱 一, Bao Yi) visualization meditation method relies on the use of an illustration called “The Sexual Intercourse (or Marriage) of the Dragon and Tiger,” which first appeared in the Ming dynasty text The Jade Tablet Decrees on Nature and Life, one of the most important Internal Alchemy works in all of Taoism. The Dragon represents Qi (vitality/breath), our spiritual energy; and the Tiger, the Jing (essence/the body), our sexual energy. Together they symbolize the two main aspects of the human consciousness and function, representing the ego (Dragon) and our instincts (Tiger).

In Taoism, the Dragon is seen as what keeps us always in delusion of a self (ego) and the Tiger keeps us distracted by instincts (id). These two mental components are forever seeking to conquer the other. As long as the Dragon and Tiger battle in the mind (meaning, the ego attempting to overshadow the id, and the id overpowering the ego) we will remain in the state Taoism calls “perplexity and turbidity.” But once the ego and id are revealed as false we experience “clarity and tranquility” or what is called “the naturally-just-so” or “attaining the Tao.”

In this book, Stuart Alve Olson provides a concise and detailed look at the Taoist visualization meditation method of Embracing the One, clearly explaining the underlying principles of this ancient practice and providing the first English translation of the text, illustration, procedures, and related chants. Even though the methods of Embracing the One are distinctly simple in application the effects of the overall practice are quite profound and deep.

Through the simple act of visualizing the Dragon and Tiger a whole new mind ground can be discovered, naturally bringing forth the “Spirit.” This little work is in many ways a landmark piece on Taoism and will definitely augment one’s knowledge of meditation and Taoist philosophy. 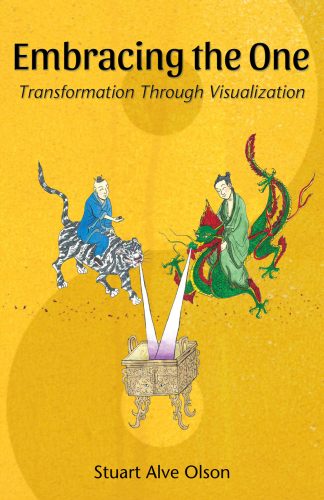 You're viewing: Embracing the One: Transformation Through Visualization $29.95
Add to cart