The Treatise on Actions and Retributions is probably the most widely distributed and printed spiritual book in history, having been cherished by Taoist, Buddhist, Confucian clergy, and the Chinese populace for centuries. The work is definitely Taoist in origin, and Stuart Alve Olson has done an excellent job of presenting its Taoist roots and showing how it’s meant to be studied as a Taoist internal alchemy text. Much of this work provides first-time translations and explanations of this incredible source text on Taoist philosophy and internal spiritual cultivation. This book belongs in the library of everyone interested in Taoist teachings and practices.

Actions & Retributions serves as a foundational guide for Taoist cultivators seeking the lofty goals of achieving virtue (spiritual strength), longevity, and immortality, presenting an alternative method of internal alchemy. This Taoist text teaches that our actions of performing good deeds and maintaining correct moral behavior brings good fortune; by quelling the negative influences of the inner spirits of the body and mind, we may attain longevity and optimum health; and through internal cultivation of our Heavenly (Hun) Spirits, we can achieve immortality.

This treatise first appeared in tenth century CE along with its sister work, The Supreme Exalted One’s Classic on Eradicating the Three Corpse Spirits and Nine Worms for the Protection of Life. Studied by Taoist clergy and familiar to serious Taoist cultivators, this lesser-known work is an integral document for understanding the Treatise on Actions and Retributions. Stuart Alve Olson incorporates excerpts from this text to not only clarify aspects of the Treatise on Actions and Retributions but also introduce the classic for a future volume, as these two complementary works should be studied together to fully appreciate the distinctly Taoist perspective and teachings they collectively provide. 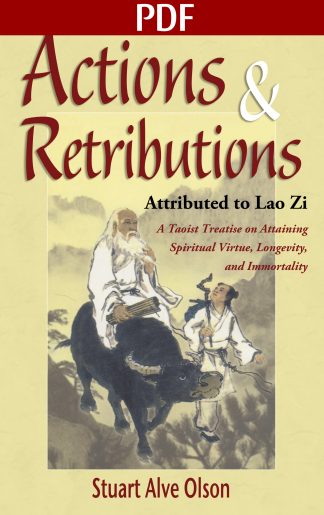